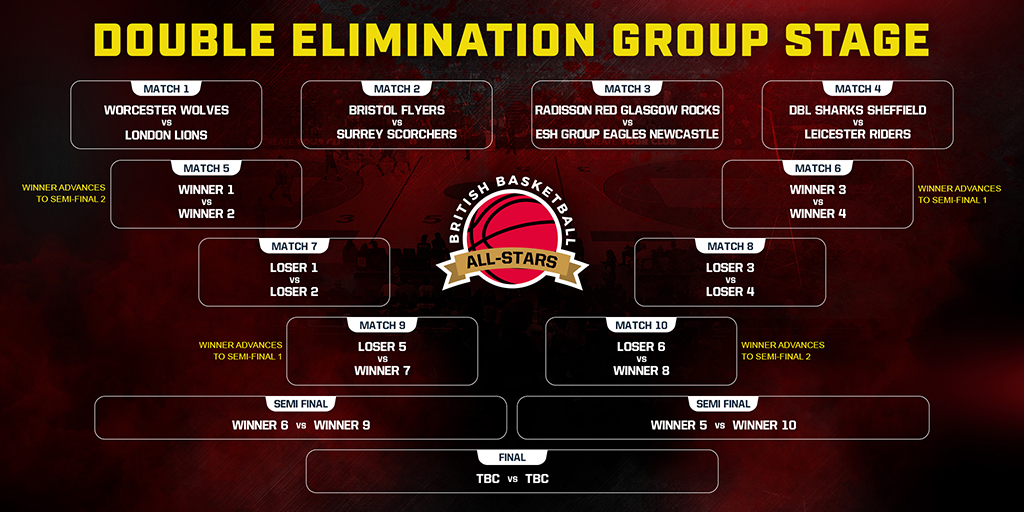 The draw for the double elimination stage of the British Basketball All-Stars Championship has been made, with London Lions to open their title defence against Worcester Wolves.

The tournament begins at 1pm on Sunday, October 14th at the Copper Box Arena, London and will be broadcast live on Sky Sports Arena and Sky Sports Mix throughout.

The British Basketball All-Stars Championship starts with a double elimination group stage comprising a total of ten matches. Win your opening match and you’ll face another winner for a place in the semi-finals, while teams who lose their opening matches face off to remain in the competition. After each side has played two matches, those with one win and one defeat play a third match with the winner advancing to the final four.

London Lions won the inaugural British Basketball All-Stars Championship last year, beating Newcastle Eagles 26-25 in an enthralling final. Justin Robinson was MVP on the day and Lions will be hoping he can help fire them to a successful defence this weekend.

The 2018 British Basketball All-Stars Championship takes place on Sunday, October 14 at Copper Box Arena, London. Tickets are available via www.allstarsbasketball.co.uk with tickets priced at £20, £30 and £40 with courtside hospitality tickets available at £99. Under 18s receive 50% off tickets, excluding courtside hospitality. Family and group discounts will be available.